It was 1930. My grandfather Adolfo Fioretti owned a small holding in Savigno and traded grain and flour.
In 1962 my father Gino bought a holding called Tintore in Castello di Serravalle and, following in his father’s footsteps, started trading cereals and fruits (Duroni of Vignola, plums, apples, table grapes and wine grapes).

In 1990, after a brief period of working as an employee, I heard the call of the land and I began my activity of a farmer.
In 1999, with my wife Francesca, we opened the Agriturismo La Tintoria.
Now with the help of our daughters Isabella, Federica and Stefania the story goes on..Era il 1930. Mio nonno Adolfo Fioretti possedeva un piccolo podere in Savigno e commerciava in granaglie e farina.

In the sweet hills of the Samoggia Valley, in between Bologna and Modena, in a harmonic series of vineyards and groves, old parishes, towers and old mills, the small medieval village of the Tintoria is the natural landing point of a tourist looking for nature, history and tastes of the area. 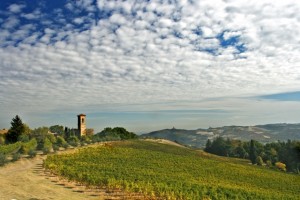 Here, indeed, is where the torrent Samoggia laps the badlands, Castello di Serravalle(“City of wine”) and where Savigno(“City of truffles”) meets.

It was on these crests that the old road Cassia (street that connected Rome with Modena) was run and it was in this area that the inhabitants of Bologna and Modena fought in 1325 (Battle of Zappolino).

Also, it was just in Tintoria during 1843 that the papal armies battled with the first rebel of the Italian Renaissance. It is in this border area that the different traditions blend together, and a culture of food and products of the area develop and enrich itself.