Today our agriturismo is in the town of Castello di Serravale in a small and peaceful medieval village of the first hill in the Bologna area, on the road that leads to Savigno and that continues toward Tuscany. In the Roman age, our village was in the middle of a rich countryside which touched the east side of the Cassia, one of the big arterial paved roads of the Roman Empire that connected Rome with Modena. 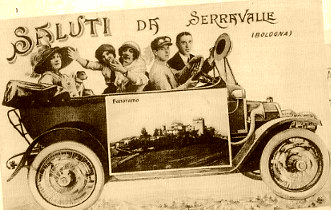 Between important Romans mansions, our settlement included a complex of rural houses with a nearby necropolis datable to the third or forth century A.D. It was a religious vocation that permitted the settlement to survive the difficult anguish of the barbarian invasions and the subdivision of the territory between the Byzantine Empire and the Lombard Kingdom, which had its border here.

Up to the X century, it is testified that the presence of a church dedicated to Saint Donnino: at its feet rose on the foundation of Roman buildings, two tower-houses in stone and wood. Surely the Comacine masters were the ones who directed the building of the construction that had the double function of defence and house. In the Early Middle Ages the territory was indeed abandoned to itself and, while the town of Bologna and Modena were beginning to organise their territory, our village was under the influence of the Lords of Cuzzano, who from the near castle domineered on the valley and with their loyalty to the Emperor contrasted the requests of the city of Bologna that wanted their submission.

Between betrayals and alliances, that saw the Cuzzano family allied with the inhabitants of Modena during the battle of Zappolino, one of their descendants named Carisio inherited the territory of our tower-houses. It is in fact from ‘400 that from inside our village started a small renaissance.

Carisio and his descendants upgraded to the noble class of notaries and settled their houses here, so that the first name of the village was from the house Accarisi. Beams and carved wood in the halls of the houses testify the noble test of the past everyday life.

Unfortunately, toward the end of ‘500 after a long rainy season, Monte Mauro, that towered over the Accarisi Houses, slid over them in a landslide and buried the Romanesque church as it totally erased the highest part of the village. With the extinction of the Cuzzano family from the ‘600, the village fell under a progressive decay. Some farmers that served the church, which became the owner of most of the land, started to live in the towers, changing and enlarging the village.

This is the outlook that the Abbot Calindri described in his history of the Apennines around bologna in ‘700. During the years, the economy of the village (other that the products of the gardens and groves) could count on the growing of mulberries and the farming of silkworms since it is a real peculiarity of this specific area of the valley.

The water, indeed, becomes the new protagonist of the area that in the centuries transformed itself, as it was always developing.

On the banks of the Samoggia in the farm called “the lake”, maybe for a bight of the torrent itself, now rises a powerful mill that uses the energy of the waters (thanks to a canalisation that serves all the mills of the valley), that in the meantime have joined the mill activity to other small pre-industrial activity, like sawmills, crollature for seeds, and dye works.

It is just this last activity of dying the hemp, linen, and silk that makes Bologna well known for the trade of fabrics at an international level, even in the ‘800. It is this building, really unique in the industrial archaeology of the valley, that to this day leaves an inheritance the name of the village and of the Agriturismo.

And meanwhile in the Tintoria in August 1843, the farmers got ready for the mass of Saint Mary’s feast and then some gunshots were heard; it started from here at the gates of the city of Savigno, the revolutionary movements inspired by Mazzini against the garrison of the Papal State police. The dream was, from the start from these hills, to unify Italy!

Not far from the centre of the revolution (Moti di Savigno, August 15 1843), our stone and wooden houses were the operative bases of the army of the Pope Gregory XVI to restore the previous order in the area. These events didn’t stop the work in the Tintoria, works of which we preserve all the registers of the end of ‘800 after the unification of Italy.

Starting from the twenties, the village faced another period of decay: first the big earthquake of 1929, then wounding of the second world war. The village was almost left untouched from both of the events, because of the solid bases were realised in the middle age.

Only during the last years do we see a recovery of this important historical heritage of which the Agriturismo is first in rediscovery and improvement; a new little renaissance at the beginning of the new millennium.